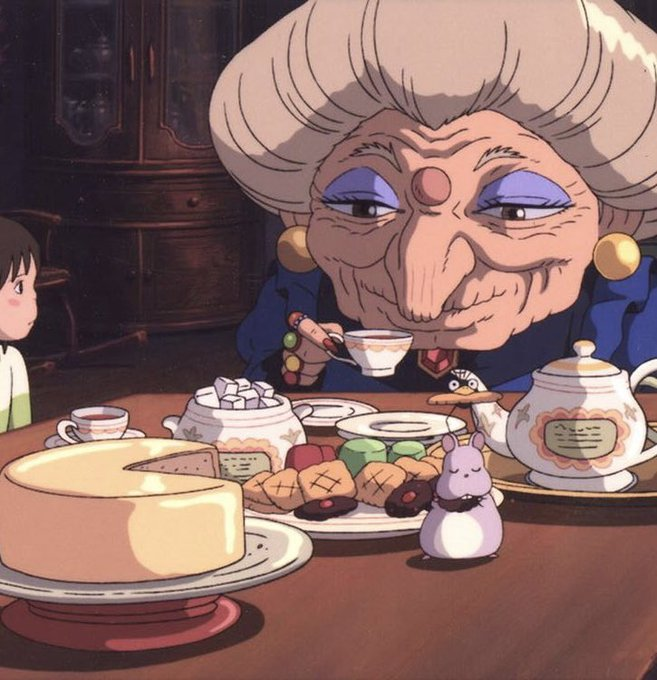 Zeniba aka Granny from the movie “Spirited Away” (displayed in accordance with section 107/Fair Use policy).

I have the best grandma in the world. She’s barely 1.50m tall, loves to give me hugs and her cooking is amazing. Also, she’s a witch, although she is not aware. In fact, she would vehemently deny practicing any magic at all, for such a sin is punishable with…

She is a very religious lady, the kind you find in church every single Sunday, all dressed up and heavily perfumed, eager to listen to the word of our Lord and Savior. A classic old-lady stereotype where I come from, nothing new. Except that she’s a witch and practices magic every day.

Granted, every work of magic she has ever performed is in the name of the Saints of the Catholic Church. She does not even know any of the demons populating the hell she believes in, but who needs those when you have so many different faces for Virgin Mary anyways? I guess one giveaway of her practice is that several shrines and altars can be found all around her home. I remember growing up to daily offerings of fresh jasmine flowers in front of a 1m tall sculpture of Virgin Mary in her living room.

Whether it was to ask for something specific, to show gratitude for something that happened, or just to keep Her happy. Fresh flowers would appear in the altar every morning during spring and summer, filling the air with the smell of magic in the form of a jasmine scent. Eventually her huge jasmine plant died, and she switched to candles as offering, with no change in the effectiveness of her prayers (from which I have often benefited!).

These prayers, of course, also take the form of those long spells that are so frequent in the Catholic Church. “Our Father, who art in heaven, hallowed be thy name…” and “Hail Mary, full of Grace, the Lord is with thee…” are the usual ones. But she also includes many more that are not so common.

There is one in particular that always struck me as a powerful piece of magic. It is a very long spell, easily 500+ words, that you recite when something important is lost. Now, if you recite it correctly without making any mistakes (mind you, you can’t rehearse it until you know it by heart or it won’t work!) whatever you have lost will find its way back to you. However, if you make any mistake at all, or you cannot finish the whole prayer, whatever is lost will remain lost forever. No heresy here though, it only involves Vatican-approved Saints to guide your stuff back to you.

I have to say, this prayer works like a “charm”, every time she finishes it successfully whatever was lost ends up appearing. And sadly, vice versa: I am still hoping to find a toy I lost as a kid that she predicted would never be seen again. Rate of correct guessing: almost 100%.

She also taught me banishing and warding techniques at a very young age. I remember sleeping over often when I was growing up, due to my parents working late. At this age I used to be very scared of the dark, especially in an old house with a long history. So she would sit by the bed and say a prayer with me that was meant to “drive away the demons”. It was a long prayer, as it should, but there was a verse that (roughly translated to English) went something like this:

Four corners in my bed,

At the main door are Jesus and His Mother,

In the kitchen Saint Catalina,

And at the bedroom door the Holy Sacrament.

It has only been recently that I realized that the first two lines are similar to the idea of the LBRP! Turns out I was banishing around already when I was 8, without being really aware of it…

However, my favorite bit of magic is what she does in the kitchen. She is an amazing cook, mostly due to the many years of experience. But I also believe she’s got something else going on.

For example, whenever she uses garlic, she would only use three cloves, never two, never four. Why? Obviously because of the Holy Trinity, duh. And when she needs more garlic? Then she would use five, because those are the injuries the Lord had after being crucified. Need even more? Then always seven cloves, representing the Seven Sorrows of Mary.

She always (always) stirs the pot counter-clockwise, and always taps exactly three times with the wooden spoon afterwards. And she keeps a huge garden full of different plants to use as treatment for several conditions, giving her total witchy vibes.

The moral of the story? You can be as magical as you want within any belief system, do not need to step out of it in order to live your spirituality to the fullest. And you know, if my grandma can do it, there aren’t any excuses for you 😉