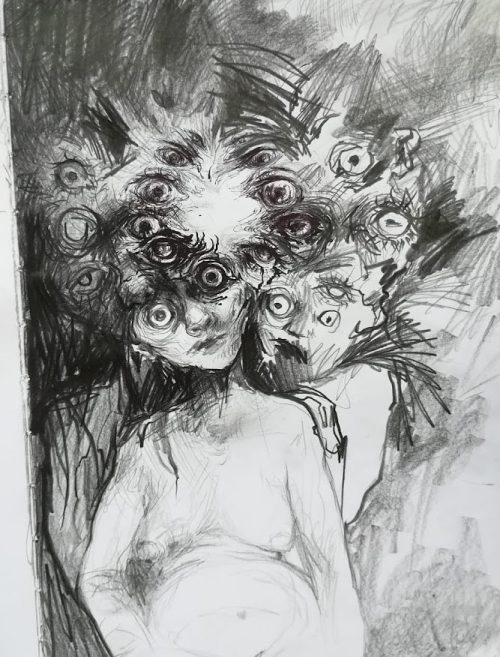 What the fuck are angels and demons? I can’t really give you a concrete answer. I don’t really have one myself to be honest. As it stands, it’s fair to say that the angels are manifested in Yetzirah and Briah (the worlds of formation and archetypal intelligence respectively) as raw archetypal divine forces. In Assiah, the physical world, where shit is actually relevant, they are the highest archetypal ideologies of your unconscious mind. This means that in essence, it’s an idealization beyond your conscious thought and limitations. It will always work for the betterment of first the self then everyone else involved, and working with angels shapes YOU into that ideology, making that unconscious potential a missile at your fingertips. It’s almost like a mold you can melt into.

The Goetic Spirits work in a rather similar way, where you would expect them to be the opposite. In essence, a demon is the autonomous manifestation of an unconscious archetype that manifests based on the level of development of that part of the magician themself. Because, well, it’s manifesting through that part of you. Cultural nuances aside, the angels nor demons refer to each other negatively, and certainly not as fallen. Upon my first evocation of the Goetic spirit Bael, he readily explained to me that the spirits are even not offended by the use of thwarting angels;

“You used to carry a revolver when knowingly going into a bad neighborhood, did you not? It’s not wise to be in questionable places or with questionable people without some sort of fail safe. And certainly don’t brandish it, because brandishing and braggery are tell-tale signs of weakness.” – Bael

So there ya go. Straight from the regal maw of the head of the infernal powers. Coincidentally Raphael said something very similar, however he added that they were in fact the same streams of consciousness as their goetic counterparts, even if the Goetic Spirits aren’t aware of this occurrence. King Paimon elucidates further, saying that the names of their counterparts aren’t always accurate. He says rather than Haziel, its Azazel, which makes perfect fucking sense given the strong implied connections between those two Intelligences. Deviations aside, one is not superior to the other, they’re just different. And the information we have officially on the subject is so shaky and varies so heavily even within similar circles of sources that you have to ad-lib with a good deal of your own shit to make it culturally relevant to your understanding of the cosmos.

How do you do that? You’ve got to harness that existential frustration.  It’s something that’s understood by folks who have been to war… or stood on a block. When hate is all that you know, and the walls of stability collapse in on you, crushing you, in that moment… it’s just you and god, however you imagine god to be. That moment of clarity, in the face of immediate death or worse, when, after throwing your hands to the sky; you shout out, “Eloi, eloi, lama sabachthani” (My god, my god, why have you forsaken me?), but instead, “Let’s do this shit. I don’t give a flying FUCK.”. You harness that moment of absolute agony and trust fully in the divine, in yourself, and you call out immeasurable strength from the core of your being, and the core of all things, and you just get the shit done. Whatever that shit is. Many folks who have a lot of say would prefer it if you kept that out of the circle. I say bring that to the circle, because that shit is the source of your power.

I have seen people succeed in evocation using a variety of methods, it’s very clear that there isn’t so much a right way in as much as there is a proper guideline for the creation of a formula. In layman’s terms, you clean the space internally/externally, and set the ceremony’s commencement. Next, you invoke deific and elemental forces, and generally follow the use of either sort of hierarchy and/or intermediary spirit. Then you negotiate with the spirit, hold a conversation, beg them to pay your bills, etc. Stephen Skinner has some fancy ass names for this, but I call it a sensible flow of conversation.

And as far as etiquette goes with spirits, well… this is a guest in YOUR home or space that YOU are asking for a FAVOR. As long as you remember that and act accordingly, you’ll be fine. Offer a drink or a snack. Clean up a bit, play some nice music they might like. But whatever you do, keep it real. These beings manifest through parts of your mind. It isn’t so much that they know what you’re thinking so much that they ARE what you’re thinking. You are constraining them to be truthful, it is only fair to offer the same courtesy.

An evocation is generally executed one of three ways. There is the simple petition to the spirit, where you simply work through a quick ritual to make a request. The second is essentially esoteric Skype, where you communicate with the summoned entity through a scrying medium, and the third is the stereotypical long winded conjuration to visible appearance traditionally associated with Western Magick. It looks cool, and makes you feel really important. From my experience, unless you need to move metaphorical mountains, it’s not particularly practical.

Say you need a better job, and you’ve selected the spirit you want to work with, let’s say King Paimon for example. I mean you could do an evocation to visible appearance and that’s totally fine. But it’s King Mother-Fucking Paimon; the KING OF DJINNI. You know, those wish granting guys. A better job is as easy as lining up your correspondences and making a well put together petition. Seeing as how King Paimon really only wants your time and to impart wisdom a better job is no problem. Best if you can speak with him through a two way scrying medium, he loves to talk and you damn well better listen! A simple conversation with him can get you exactly what you want without starving yourself for three days and spending a frustrated hungry two hours reciting some catholic bullshit you could give two fucks about. The other way takes 20 minutes. You be the judge! That being said, there are many folks who like the traditional way, and these folks seem to have more regular success with the practice… and in my personal experience either way works.