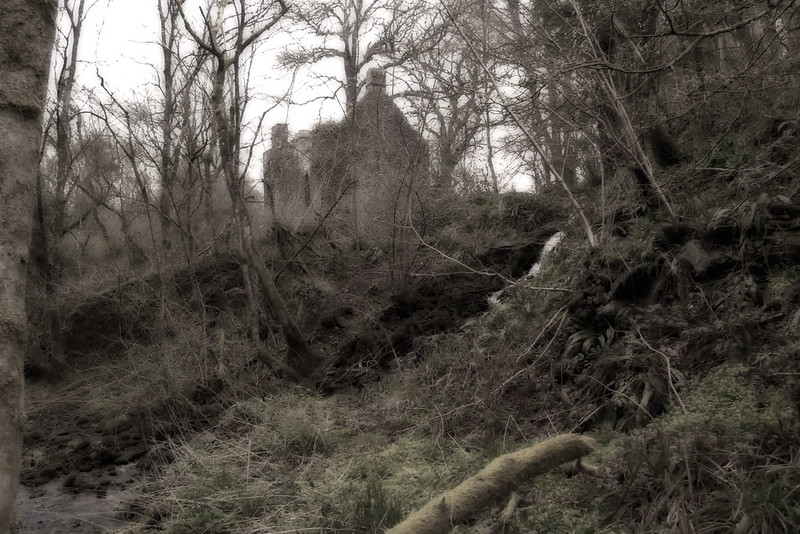 The Art of Hedge Riding – A series [Part I of IV]

In this series we will be exploring the art of Hedge Riding. This is an advanced form of magick in which one enters an altered state of consciousness that allows them to peer beyond the veil separating this world from the next. Through this ability, practitioners are able to better connect with spirit guides, ancestors and other entities. In addition, it can be seen as a valuable tool for self exploration and further development of occult skills. In part three we will take a closer look at the techniques used to cross the hedge.

In part one, I will explain a little about my background and describe how I came to learn this amazing skill. In further installments I will guide you as I was guided.

The Hedge Witch – My Induction into a Familial Branch of Witchcraft

Hedge Witch – for me the term conjures up a nostalgic image of a time gone by, an old lady living in a cottage at the edge of the village. A lady known for her tinctures and brews made from her own garden which would be overstuffed with herbs, fruits and poisonous plant life and surrounded by a hedge.

Proud and strong, she is one of the most respected women in the village, people turn to her when they don’t know where else to turn. She usually has the answer though it’s often what one needs to hear rather than what one wants to hear. She learned this from her mother, who in turn learned it from her own mother and so it has been for generations.

The person I described above was my mentor, Rose, the last of her family line, she never married and bore no children, she always said she was far too busy to have a husband and children under her feet. There was a problem however. As Rose passed child bearing age she started to wonder who would carry on the family traditions. She was an only child so there were no nieces or nephews to pass it along to. She decided that this particular branch of familial magick would die with her.

In the mid 1980s Rose was getting on in years, no one knew her true age and asking for it would result in a throbbing ear. Rose was not a tall woman, I’d estimate she was around 5’4” in height and of a slim build. I always remember Rose dressed in eccentric floral dresses with her white hair always tightly wrapped into a neat bun. She had a strong and stern face that could curdle milk if she glared at it for long enough. She rarely smiled but when she did the smile would reveal incredibly well preserved teeth for a woman of her (unknown) age.

Rose decided to employ a lady to help her keep the house clean, run errands, take care of the garden and the animals etc. Fortunately for me, that lady was my mother.I first met Rose when I was five or six. Rose seemed absolutely ancient to me (my mother said Rose was old even when she was a young girl).

My mother had to take me to work with her one day. I was home from school for a few days having managed to get myself knocked out by a cricket bat that slipped from the hands of an older boy. My mother sat me at Rose’s cluttered table and gave me pencils and paper to keep me busy whilst she worked. I was a pretty well behaved child, I was also TERRIFIED of Rose so I sat quietly and drew pictures.

After a while I heard a “hmmph” sound of interest behind me, Rose was peering over my shoulder at my pictures and asked me what I was drawing. I had drawn some of my more vivid dreams, as a child, I had almost perfect recall of my dreams and often drew them. The picture I had drawn in this instance was of a person lying in bed with a black line coming out of the figure’s head. The line extended through some trees and bushes and into the head of another figure. I told Rose that this was the last dream I could remember since the cricket bat incident, she made another “hmmph” sound and walked away.

Later at home my mother asked me about the picture I’d drawn. I told her it was what I usually dream about, “I’m in bed sleeping then, my head wakes up and I go flying over the trees.” She seemed satisfied with the answer and I thought nothing more about it. Though I didn’t know it at the time, Rose had told my mother to ask me about my picture saying that “That boy has been taking his shadow for a walk”.

Over the next few weeks my mother took me to work with her at Rose’s house several times. Rose was a lot nicer and didn’t seem half as scary as I had originally thought, she even had some biscuits for me. Rose would take me into the garden to help her harvest herbs and plants, sometimes she even let me take some catnip into the house to get the cats stoned.

During this time Rose would ask me about my dreams, in all honesty I hadn’t remembered my dreams much since the cricket bat incident. She said she would see what she could do and gave my mother some “medicine” to give me before bed. My dreams started to return or else I started remembering them again. Rose always seemed very interested in my dreams and taught me how to practice having these types of dreams whilst awake.

So my journey began. I spent most of my formative years spending every available moment I had with Rose, before and after school, weekends and holidays. I would work the garden for her, feed and clean up after the animals, and even run to the shops for her. In return she would teach me the same things that her mother had passed down during Rose’s childhood.

Rose went on to the next world permanently in 1999. She passed peacefully in her sleep and came to me the following night to tell me not to worry about her, that it’s natural to be sad but life goes on. She also told me it would be best if I didn’t try to contact her as she would be far too busy. Rose did not believe that death was the end, just another beginning and she was sure she had a lot of work to do.

Most of what I learned would be best described as Traditional Witchcraft though Rose was loath to use the word “witch”. The thing that set it aside was what Rose called “Shadow Walking”. The idea being that within each person resides a shadow self, some may call it the subconscious, some may equate it to the soul but Rose called it the shadow. We connect with this inner self and undertake a journey across the veil. I will expand on this idea in part two.

In recent years I’ve discovered that this practice is known to other people and the common term for it these days is “Hedge Riding”, so that’s the term I now use. There are several books discussing this ability but I find they lack diversity among techniques and also tend to paint a Hedge Witch as a certain personality type. I believe that almost anyone can learn this particular skill, naturally some will come to it easier than others.

To sign off for part one, I would just like to add that though I believe almost anyone can learn to Hedge Ride it’s not a practice I would recommend for those who are new to magick in any form. It requires strong concentration, a resilient mind and ample protection. It’s not a wishy washy form of magick, there are amazing benefits but also notable risks involved which will be discussed in further installments.

If you’re interested in reading the following installments, please step this way:

The Art of Hedge Riding – A series

II. What is Hedge Riding?

III. How to Ride the Hedge