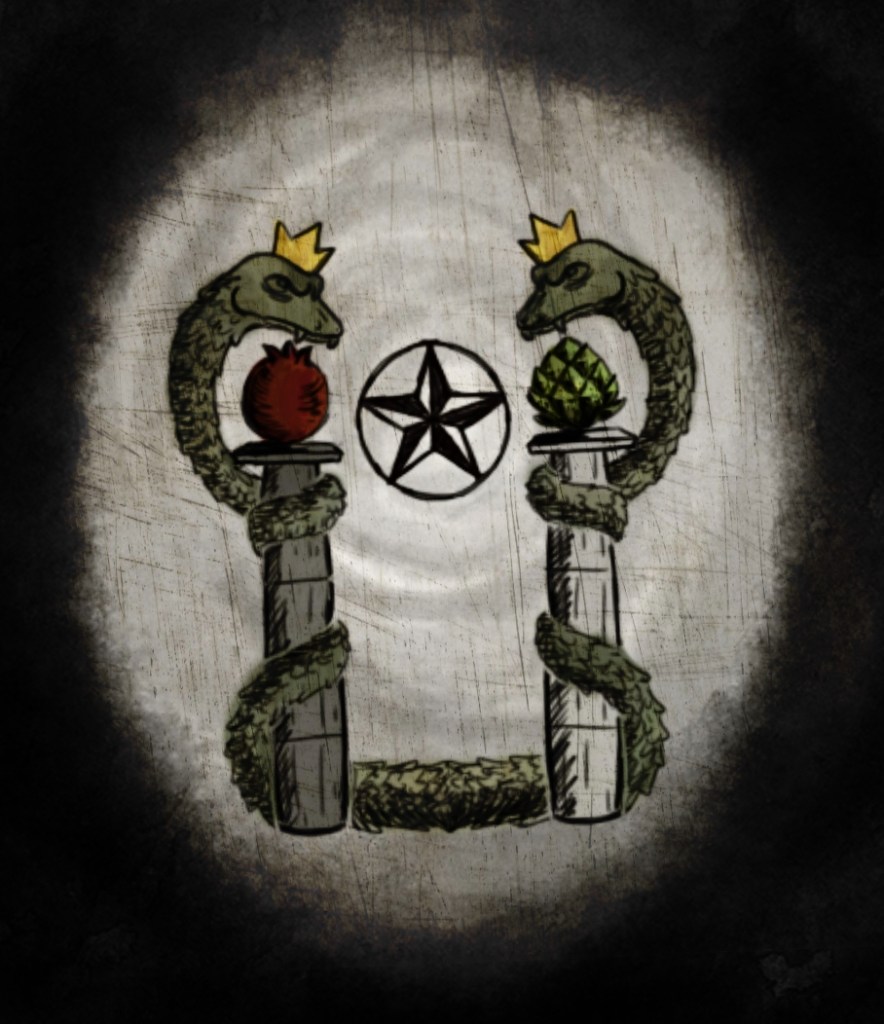 The tone here is a bit more serious than with most of our work at The Occult Living Room and there’s good reason for that. Imagine this piece as similar to a technical document. …A badass technical document that details how to create a personal occult alphabet with endless practical application – how cool is that?

In the following series, our resident writer Murphy allows us to look over his shoulder and examine Liber Chauronniwt, a magical system which has been personally developed for expressing maximum meaning with minimal notation. A noticeable parallel can also be drawn between this system and The Alphabet of Desire by Austin Osman Spare.

Liber Chauronniwt combines the script of the uppercase English letters to metaform webs of kabbalistic tarot. Ultimately, the magician is able to attach an abundance of meaning to simplistic characters or symbols. The end product is an assortment of 26 simple notations, each a discrete anchor for a large body of meaning in the astral. In turn, this seeks to commands archetypal forces through these interconnected associations.

By understanding the principles and mechanics used for the notation, the reader is potentially able to create a similar construct for utility in their own practice. This first installment is divided into three sections:

I. Deriving Meaning from the Meaningless

In the first portion, Deriving Meaning from the Meaningless – a personal examination is conducted through gnosis. This serves as a preamble for the methodology that gives rise to Liber Anglicus and its proposed ontology network. Here, the nature of words are examined through a kabbalistic lens. Terms such as The Word, Meaning, the One (among others) are each given a specific relation to the sefirot.

I: Deriving Meaning from the Meaningless

First let it be understood, the tongues of The One are uncountable, and when The One roars The Word, it is unknowable. The Word has no meaning, no image, no logic, no thought. Only the Utterance. The Word is received by the None. The None, whose body is the vessel of the One, which acts as a prism upon The Word, shatters The Word through the act of interpretation. The Word becomes the body of notation, and into notation does the None breathe the Spirit of Meaning.

In that fashion was notation wedded to Meaning: arbitrarily. Because notation and Meaning are wedded arbitrarily. They shift across each other, the friction generating the multitude of languages. Because we all come from the One, we can utter an instance of the Word. Because we all come from the None, we can interpret the Word. We are embodied by notations, and upon those notations we instill the Spirit of Meaning of Self. Thus, we are at once, the Notation, the Meaning, that which is interpreted and the Interpreter, that which is uttered and the Utterer. We are the self-perpetuating and ever-evolving machine of communication. We are The Word.

The difference between the multitude of languages is not in Meaning, but in notation. If you know more than one language, you can utter two very different notations of the same Meaning. The nature of Meaning is then unchanging, while its embodiments are fluid. One is the Platonic Form, the other is its Material Representation.

In the stage Meaning Stockpiling the magician begins to weave together meta webs of correspondences and associations with simplistic symbols (in this case English letters). The symbol acts as an anchor for the erratic flickering forms of meaning the mind derives when perceiving such images.

As a result, a surplus of meaning can be derived from a basic symbol. The practitioner is now capable of utilizing elaborate concepts with convenience. In a modern analogy, this could be compared to being able to zip and unzip a file.

Correspondence essentially creates grand webs of interrelated ideas. These webs form the fabrics of ambience used to dress the invisible archetypes, the unseen system by which interpretation functions, how one derives Meaning from the meaningless.

By means of correspondence one can create these spheres of ideas surrounding an archetype, and by the same method, it is possible to correspond entire spheres of ideas to a handful of glyphs. This is Meaning Stockpiling, using minimal notation to express maximum Meaning. One creates a simplified palette by which they can paint their world with the primal forces of the archetypes.

This section contains Liber Anglicus, which is the English alphabet, re-envisioned as a set of notations for the meanings found in kabbalistic tarot.

III: The Contents of Liber Anglicus and the Commentary Thereof

Liber Anglicus is a system of archetypal Meaning Stockpiling I’ve developed, marrying the notation of the uppercase letters of English to the metaform webs of kabbalistic tarot. I didn’t use the Phoenician associations from which English would eventually derive its symbols, because we just don’t really make those associations anymore. English letters aren’t pictographic, they just (poorly) act as notation for English sounds. This lack of deep esoteric meaning makes it useful: It’s an empty vessel into which one can pour meaning. The arbitrary method of correspondence I chose was purely based on letter aesthetic. Here’s what that looks like: 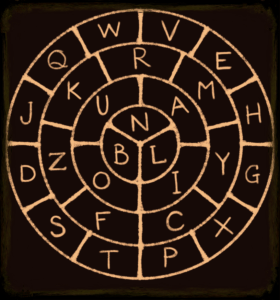 A – The Upright Blade: Element of Air, Swords of the Tarot, World of Yetzirah, East

B –  The Pregnant Mother: Principle of Natrium, The Hanged Man, The Queen, Sphere of Binah, Third of Decanates,  Mutable Aspect, Silver

F – The Laborious Scythe: Saturn, The World, The Princess, Spheres of Da’at and Malkuth, Tenth of Decanates

I – The Luminous Torch: Element of Fire, Wands of the Tarot, World of Atziluth, South

K – The Axe Head: Mars, The Tower, Sphere of Gevurah, Fifth of Decanates

L – The Erect Father: Principle of Sulphur, The Aeon, The Knight, Sphere of Chokmah, Second of Decanates, Cardinal Aspect, Sunday

M – The Lovers United: Venus, The Empress, Sphere of Netzach, Seventh of Decanates

N – As Above, So Below: Principle of Quicksilver, The Fool, Adam Kadmon, First of Decanates, Fixed Aspect

O – The Fertile Disk: Element of Earth, Pentacles of the Tarot: World of Assiah, West

R – The Hawks Eye: Sol, the Sun, Sphere of Tiphareth, Sixth of Decanates

U – The Sacred Vessel: Element of Water, Cups of the Tarot, World of Briah, North

Z – The Lightning Flash: Jupiter, The Wheel, Sphere of Chesed, Fourth of Decanates

About Notation: Consideration of Aesthetic

In actuality, there are 26 factorial ways these attributions could have been made. My set of correspondences is just one possibility out of 403,291,461,126,605,635,584,000,000 possible ways I could have given Meaning to the meaningless. Because the connections between meanings and notations are arbitrary, I encourage you, the reader, to try one of those 403 septillion variations and find one that fits you. The exact letters and sounds made are less important. What’s more important is the Meaning behind the notation.

Here in The Serpent’s Arc, a visual representation is created by the practitioner. This should only be attempted after completing the basics of meaning stockpiling. This serves as a sort of encoded palette, doubling as an interpretation of the gateway of manifestation, and also as a key. Other structures will be built in a similar way, including the pyramids, the sphinxes, the rooms of the tower, the wheel of the year.

Aspects of Liber Chauronniwt’s Later Parts will be influenced by revelations achieved through Liber Anglicus, the most key of which is The Serpent’s Arc order of the Alphabet. The Serpent’s Arc is the order of extremes amongst the archetypes, the vision of which is that of the Crowned Amphisbaena, coiling upon the Twin Pillars. 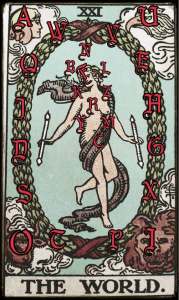 The Serpent’s Arc in Sections:

B – Crown of the Queen

L – Crown of the King

Y – The thresholds between worlds, Return

M – The delight of experience, the pleasure of existence, Resolution

R – The Center, the Eye, Climax

K – The energy in tension, the heat of friction, Conflict

Of note – the letters  N, I, U, A, and O are not part of the Serpent’s Arc. They instead form the Anglicus Pentagram, which is envisioned  between the pillars, So that the “head” of the star is N, the “right leg” is I, the “left arm” is U, the “right arm” is A, and the “left leg” is O. In a clockwise direction around the ring, it should read N A I O U. 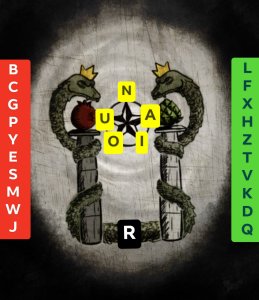 Closing note from the Editor:

As previously stated, the reader is both allowed and encouraged to use this as a template in order to create a similar system for their own personal practice. Have any questions? Still not sure about wtf you just read? Feel free to get in touch with Murphy or leave a comment or question below.

In the continued examination of Liber Chauronniwt…

How the Serpent’s Arc is used with mental constructs in personal practice.