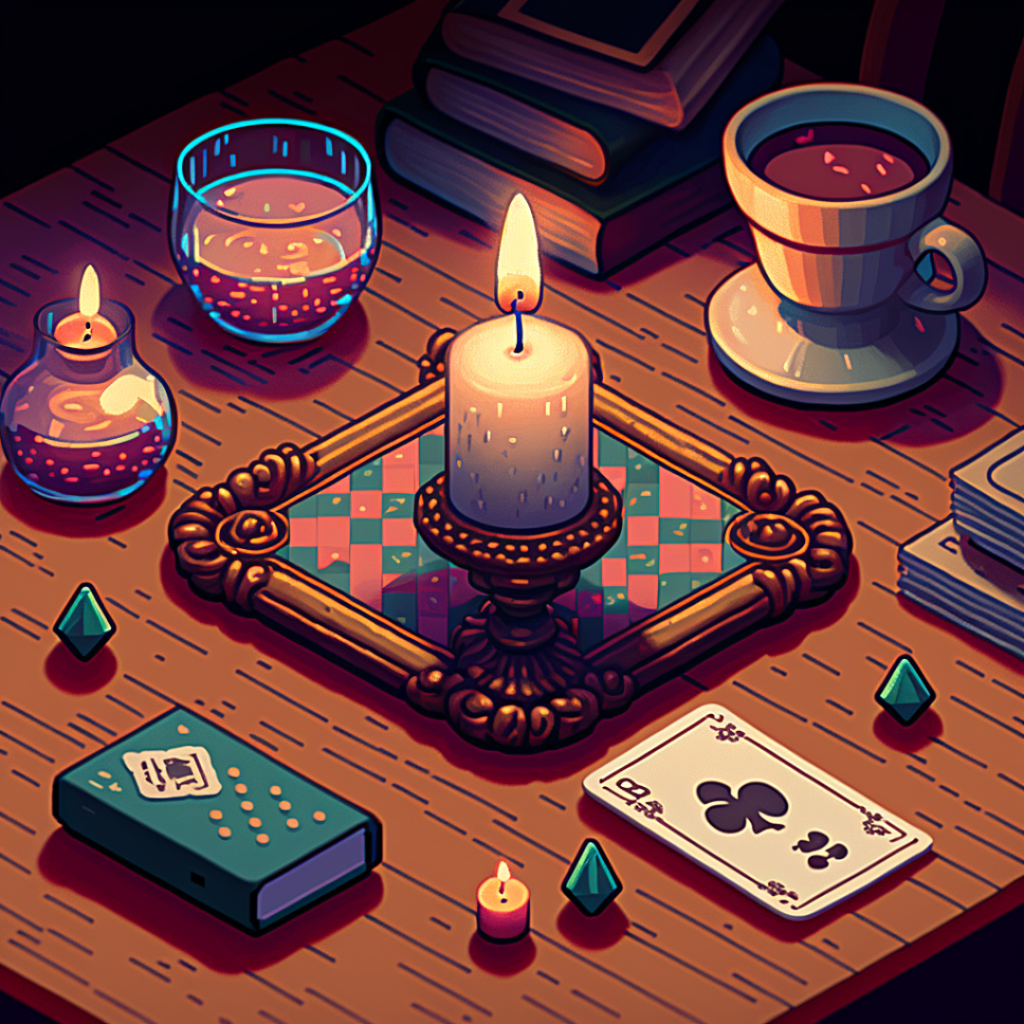 When I first began my personal path, I was overwhelmed by the prominence of tarot in western esotericism and my inability to access it. Of course, there are numerous digital options for tarot, and I’m sure they would be excellent options for many of you.

However I was personally dissatisfied by this option; I wanted to feel the deck in my hands, and I wanted the cause of the cards drawn to be my intuition as opposed to algorithms. I eventually stumbled upon playing card cartomancy, a system which gives meanings to a traditional card deck. I used this for many months, but found it lacked the sense of rich symbolism that came from tarot.

So, I eventually developed a system of using my playing cards as a proxy for a tarot deck – all it requires is a typical deck of cards and a reference for tarot card art, usually on a PC or mobile device. There’s free files of art for all kinds of tarot decks available online if you search “printable tarot decks”.

This works by drawing a series of playing cards to identify a single tarot card, and you’ll reference your art in order to see the symbolism that that card holds. This system, while complicated at first, eventually became second nature and allowed me to hone tarot-reading skills without owning my own deck for years. I hope this system will benefit many of you.

The first step of this process is that, for every tarot card you intend to draw, you must start by drawing two playing cards. This is because, while tarot involves the reading of reversals, playing cards are designed in such a way that you can’t tell up from down. So, in this system, the first card you draw represents the identity of the card itself; the second card is its position. A black card means it is to be read upright, and a red card means it is to be read reversed.

I’m sure many of you are familiar with the fact that the tarot deck, aside from the Major Arcana, is constructed from a system very similar to the system that playing card decks follow. There are four suits, and each suit has numbered cards that start with an Ace and end with a Ten.

The equation I use is as follows:

So, in that case, all you need is a way to equate the two sets of suits, and you can already read over half a tarot deck.

My solution to this was to make every drawing of a court card special. Whenever you draw one, the second card you draw indicates if it is meant to represent a court card or Major Arcana instead of indicating position. If it’s black, it’s a Major Arcana, if it’s red, then it’s a court card of its assigned suit.

If you draw a red card, and it’s a Queen or King, then you draw one more card to show position, and that is that. If it is a Jack, however, you draw two more cards – one for position, and one to tell you if it’s a Page (red) or Knight (black). Complicated? Yes, but desperate times call for desperate measures.

Now, let’s say you drew a black card after the court card, to indicate a Major Arcana. Get rid of both the cards you have, and draw three more. Add up the numbers of the first two you drew, ignoring suit.

You’ll notice that every single Major Arcana card is associated with a number. With an Ace counting for 1, a Jack counting for 11, and a King or Queen counting for 12, you can end up with any number between 2 and 24.

Since you can’t add up to 0 (The Fool) or 1 (The Magician), and the highest Major Arcana card is 21 (The World), I count anything higher than 21 as a “spill over” that resets it to 0 – so 22 would get you The Fool, and 23 would get you The Magician. The third card that you don’t add into this, as usual, gives you your card’s position.

This system is complicated, but as I mentioned before, eventually becomes second nature. If you feel a genuine call to invest yourself in learning tarot but don’t have a deck to work with, this is a great way to develop that skill, and the intuitive exercise of working with tarot imagery transfers to a genuine tarot deck beautifully.

Use these as a reference or feel free to try to determine what tarot card is being represented.

Did you find Jayme’s article useful? If so, check out another installment of From the Broomcloset here.

From the Broomcloset Vol 2: The Occultism of the Spice Cabinet