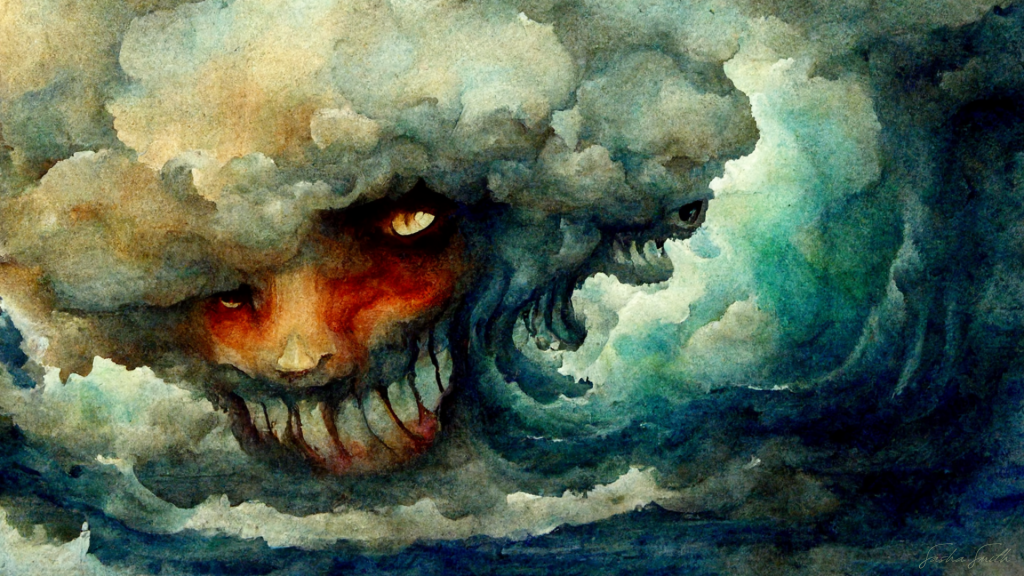 Focalor isn’t really one of the love and light kinda guys. A Portrait of Focalor by Sasha Smith

In this snapshot, we’ll be taking a look at Focalor, aka your best friend and gangster for hire – if you need a gangster demon that is. He’s generally considered to be the 41st spirit of the Lesser Key of Solomon, which means in no uncertain terms: he is a demon. If you read the description verbatim from Macgregor Mathers, it goes something like:

The 41st spirit is Focalor. He appeareth in the form of a man with gryphon’s wings. His office is to slay men, and to drown them in the waters, and to overthrow ships of war, for he hath power of the winds and the seas; but he shall not hurt any man or thing if commanded to the contrary by the exorcist. He also hopes to return to the seventh throne after 1,000 years. He governeth 30 legions of spirits.

Focalor is often associated with murder, this is especially true from Michael W. Ford onward. The correlation is so common that Focalar might not seem like a very useful spirit to most – well, unless you want to murder people. That’s not my shtick, but whatever you’re into I guess.

There are two interesting things about this entity that people should consider. Firstly, this is a demon of air, which means it’s under the rulership of Lucifer. Secondly, it’s a demon of water which is under the authority of Leviathan. So you have air: mind, and water: subconscious. From this combination, you have this ​​primordial aspect of storm magic – most often producing sudden and intense change.

Those who haven’t dove deep enough might get the impression: ”Okay, so Focalor kills people, uh now what?” By looking beyond people, the role of this spirit becomes more apparent and also a bit more extensive.

What has to be taken into consideration is that the language in many archaic texts from this era is extremely human oriented. So for example when it mentions that Focalor can “overthrow ships of war”, these ships can also be understood as something like “opposing forces”. In a broader sense, what Focalor does is destroy obstacles and that which hinders you. When working with this demon I’ve found there is a caveat – a pretty significant one at that.

You must really mean it.

He doesn’t have the time or patience for those who half ass mean it. This requires the magician to be unwavering with their intent and without remorse for their actions. Imagine trying to contain or subdue a storm – the same can be applied to how this spirit operates. A storm doesn’t give a damn if a boat is overturned or how many people drown.

This is also something Focalor tests you on: Do you really not care how you achieve this outcome? Personally, I look at this from the Nietzschean point of view in Beyond Good and Evil – which challenges the dichotomy of purely good and purely evil.

According to some of the lore, Focalor is a fallen angel who will return to the 7th heaven after 1000 years as a part of some sort of demonic redemption arc, well… It’s been 1000 years so to reiterate the first point – in no uncertain terms: he is a demon.

Alternative spellings include: Forcalor and Furcalor. While the suffix “-lar” translates to “ancestor or guardian” “col-“ generally means “bring together or combine” whereas “cal-“ can indicate fire or burning. The etymology of the first syllable is not immediately clear. Either way – not an ideal baby name despite what some websites might have you believe…

Interested to read more of Andrieh’s work? Check out: