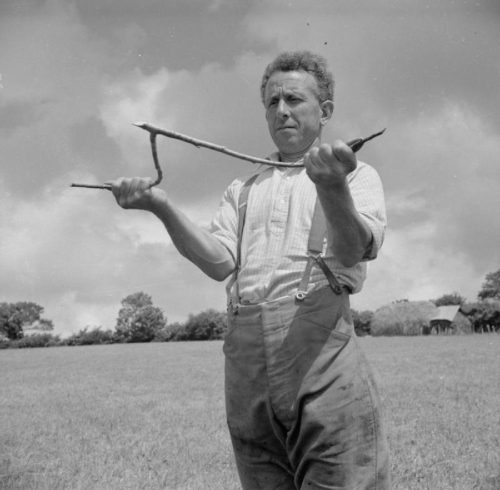 Image courtesy of the USGS

Both inside and outside occult circles there are a few terms which are almost synonymous with the word divination. If you examine the practices of divination in a broader scope, it’s clear that humans have attempted it in damn near every way imaginable.

With just a white rooster, piece of chalk and a few grains of corn you’re able to attempt alectryomancy. It’s even simpler to skip lunch and try gastromancy which is literally listening for disembodied voices within stomach grumbles. Uh, there’s also styramancy which is interpreting used chewing gum shapes plastered to the sidewalk.

Most ancient methods simply involved using minimal tools or things that could be seen and interpreted (bones, animal organs, the sky, shadows, reflections and of course, shit – see scatomancy – or don’t). Studying these antiquated practices can offer a unique insight into the society and norms of the time. This article examines a crossroads between a specific tradition of divination and its modern day perception.

Even those with limited occult knowledge have probably have seen the cliché image of a someone dowsing. Usually a person is holding either two L shaped rods or a Y shaped tree branch. Often times the individual (known as the dowser) is seen with a very focused or sometimes perplexed look upon their face. Historically, this divination method has been used in hopes of locating buried treasure, precious metals, jewels, untapped oil, water reserves and so on. The assumption is that some unseen force(s) guides the practitioner to the location of their desire.

In the rural American deep south, the practice of dowsing specifically for water became known as water witching. It’s understandable as to why poor farmers would resort to almost any technique – despite the vast majority being from a protestant Christian background. Dowsing in general was seen by many as “of the devil”, but as time past, water witching gained a more admissible reputation due in part to its success rate and the prosperity that followed.

My great uncle was a water witcher in Alabama. This man was extremely proficient in regional folk knowledge and tradition. Interestedly enough, he was also a fairly devout Baptist and even had a stint as the church’s custodian. The wells on my family’s land were all found through water witching. This was also true for the majority of the neighboring properties. It had been a standard practice well into the modern era until eventually becoming linked more and more to superstition or pseudoscience.

I specifically remember a time when the county water division was trying to pinpoint the precise place to drill in order to establish a waterline for a new series of farms. They had attempted and failed for several consecutive days. A local dowser was eventually (and reluctantly) called. Within two hours the municipal workers were scratching their heads and looking rather bewildered as they struct groundwater directly where the dowser had suggested.

“Well hot damn, would ya look at that…”.

By now, your interest may be piqued regarding the technique itself. Well, I remember my uncle specifically telling me in his thick and effeminate southern accent “Honey, it ain’t nothin’ to do with spirits or the devil. It just works like a magnet.” He made it clear that a dried peach tree branch shaped like a Y was essential. As the dowser approached an underground concentration of water there would be a downward pull and the branch would serve as an arrow to indicate the location of the water current. I’m sure this skill needed to be honed but apparently, no spirits or entities were required – at least knowingly.

In the late 90’s there was a study conducted on dowsing for water by the Journal Of Scientific Exploration – a peer-reviewed scientific journal published at Stanford University. Over 2000 sites from around the globe were used and the study was conducted over a ten year period. The head researcher, Hans-Dieter Betz, a physicist at the University of Munich had this to say:

“In hundreds of cases the dowsers were able to predict the depth of the water source and the yield of the well to within 10 percent or 20 percent.”

“We carefully considered the statistics of these correlations, and they far exceeded lucky guesses.”

The depth of this study was extensive and the conclusions are pretty convincing, here’s a link if you want to examine it further.

I did some additionally digging and apparently Albert Einstein had even provided some commentary on dowsing. He had this to say in a private 1946 letter to a constituent.

I know very well that many scientists consider dowsing as they do astrology, as a type of ancient superstition. According to my conviction this is, however, unjustified. The dowsing rod is a simple instrument which shows the reaction of the human nervous system to certain factors which are unknown to us at this time.

It was rumored that Einstein had witnessed a successful water dowsing operation first hand. Supposedly while at a dinner party, the host had mentioned a leak in his pond and another guest was able to accurately detect the origin. Allegedly, this was done by identifying the strong current which flowed toward the pond’s leak. Although I couldn’t find sufficient evidence to really corroborated this story, there are a few second hand accounts in various historic publications. If true, it would seemingly help to justify why Einstein also said this in the conclusion of the letter:

However, I do not think there is any connection with the occurrence of cancer. This latter connection, if true, would not be easy to prove with supporting statistics.

Within the occult arts there are practices that directly involve spirits, deities, or some forms of disembodied intelligences in order to (hopefully) achieve desired outcomes. On the other hand there are practices that don’t make use of entities or spirits whatsoever. How much of the latter simply falls somehow into the blindspots of well, even “mundane” science or perhaps depth psychology?

Furthermore, how much of magical functionality is intertwined with more sophisticated branches of science? Much to the dismay of many occultists (and physicists), “quantum” has really become this catch all bullshit buzzword used in an attempt to substantiate sorcery. Occultists have very strong and divided opinions on this and it’s beside the point.

In my mind, it’s not far fetched to believe that if enough time and resources were used, a somewhat “ordinary” but technical explanation would be found related to water witching specifically. There could be many reasons why such blindspots exist but it’s evident that most scientists dare not venture even close to what could be considered pseudoscience. This probably comes from fear of putting one’s professional reputation at stake and well of course, well, lack of funding.

Personally, occult topics that lie far beyond measurement via means of the scientific method are the most intriguing. With that stated, I also don’t mind pondering about where this line can be drawn. Ultimately, many esoteric traditions involve the blurring of some line or another. It could be helpful to know more about where those lines may begin and end… or not.

I’d be eager to hear your thoughts in the comments.

Should occultists have any concern about rational/scientific validation?