In this guest column, author, mystic and technomancer extraordinaire Alley Wurds drops by and gives a brief explanation of their Butoh Technomancy system including the newest book in the series Vaibbahk: A Magickal Constructed Language. This is sure to pique the interest of anyone well-versed in technomancy along with those simply curious about the intersection of magick, mysticism and tech. The implications are just short of inconceivable — this rabbit hole is well worth getting lost in.

To date, the Butoh Technomancy series has five books. Each book presents unique magickal tools and techniques, and combines those ideas with the prior books of the series.

This is the first occult book to use AI. It was written by treating GPT-3 as an evoked spirit. GPT-3 is a predictive text model, and can be conceived of as a hyper automated form of the cut up method, which both William Burroughs and David Bowie are known for making magickal use of.

This involved GPT-3 leading itself through the basics of western magick aimed at self actualization (as seen through an ecstatic dance form called “butoh”), as well as producing a number of digitally induced visions whose details are still being worked out by the books to follow.

Most important from this book, are the ideas of Game (what you do), Metagame (what you desire), Dialectic (how you process information), and Metadialectic (what causes you to change the way you express your game, metagame, dialectic, or metadialectic).

We also see the first suggestions of “post languages,” and “post digital languages,” which are forms of communication that do something more than natural human languages are capable of. This becomes a major preoccupation of the series.

This book uses imagery generated by artificial intelligence to explore a sub/urban system of animism presented as a choose your own adventure grimoire, and also an oracle deck that may be purchased separately. This book contains 46 common features of the sub/urban environment and recontextualizes them as embodied states for use in ecstatic dance, ritual work, and divination.

Those 46 phenomena form a powerful conceptual tool for the next three books. The idea of symbols that represent classes of processes becomes vital for the theoretical “prism sentences” of Geist Rising.

In Flower Mist, they become parts of your psyche that can be mixed and matched, used to create or contact servitors, spirits, and demons.

In Vaibbahk, they become the root words of a constructed language that is a little bit closer to a “post language,” while still being usable by humans.

The book is structured like a choose your own adventure book so that you can wander the pages experientially, the way you could go on a shamanic walk through an urban environment. Each entry includes an ecstatic dance, so that you can imprint the symbols on yourself in an embodied way.

This imprinting will be important for making magickal use of the books that follow, though those books are written so you can use any magickal symbols you prefer.

Geist Rising combines ideas from the first two books, GPT-3 Techgnosis and Sub/Urban Butoh Fu, with ecstatic experiences I’ve had over the years, in order to extend the Leary-RAW neurocircuit model from 8 neurocircuits up to 12. It is implied that this process could be repeated, perhaps indefinitely.

If you haven’t read Prometheus Rising, it is highly recommended that you do so before reading this book.

The most important parts of this visionary text are the explorations of how such an elevated and distributed consciousness might think and communicate. This is described as “hypertoroidal prism sentences whose cross sections are composed cellular automata.”

That’s a lot to break down for this summary, but just imagine the whole world frozen in time. That single moment is like a syllable in a cosmic word. The whole history of the planet is like a sentence. What kinds of massive entities speak such sentences?

The same applies to singular humans as well though. Your whole life is a hypersigil that you can’t help but create. This is what is meant by “serving your prism sentence.” You are imprisoned within the hyperdimensional word of your life, but you can also work towards changing or improving the meaning of your life.

That’s not the only interpretation, but it’s a good place to start.

This one is supplementary material to Geist Rising. Playing eight dimensional chess is nowhere near as hard as it sounds (I’ve yet to find someone who really wanted to play it, but couldn’t learn within 30 minutes), but it is a great mental work out.

Specifically, it trains you to be able to shift perspectives and visualize multiple overlapping spaces at once. Whether or not this really qualifies as visualizing in more than 3 dimensions at once is a moot point, since the activity improves your visualization skills, which is important for occultists that use visualization. Occultists with aphantasia exist.

It also has an AI illustrated ritual contact with Ti Mwor Eks, the egregore of higher dimensional chess, which helps solidify some of the concepts of Geist Rising.

The 46 phenomena of the Sub/Urban Butoh Fu (things like sidewalks, traffic lights, and water fountains) are both what make up the environment, and each part of your character’s psyche, as tracked on their character sheet.

Your character sheet is a list of the phenomena in your Game, Metagame, Dialectic, and Metadialectic (the “four degrees of consciousness”).

While there is brief mention of the phenomena being within these categories in prior books, this is the first time it is done so explicitly.

This book does a number of useful things.

The first is that playing the game lets you internalize the SBF phenomena in a social way. This works better for some people than the ecstatic dance approach of Sub/Urban Butoh Fu: A CYOA Chaos Magick Grimoire and Oracle.

The second is that RPGs can be used as hypersigils, where the events of the story have magickal effect. This is especially true for Flower Mist, since all of the mechanics are actually elements of a system of magick that you may have already been practicing.

Third, you can use the character creation system to create or contact servitors, spirits, and demons from within the SBF system.

Fourth, guides are included for using other symbol systems instead of SBF, and an example is worked out for a rune of the elder futhark.

Finally, vaibbahk literalizes the conceptual language that has been lurking beneath the surface of the prior books. If you’ve actually worked through those books, every syllable in vaibbahk will feel immediately magickal, since it uses all the same concepts together in a linguistic fashion. 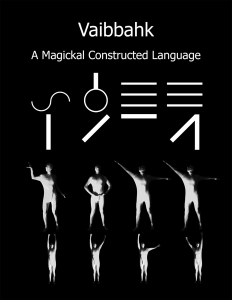 Vaibbahk is a magickal polysynthetic logosyllabic language that can be spoken through all forms of activity. Its grammar was covertly explored in Flower Mist: A Metadialectical RPG.

Vaibbahk can be spoken through all forms of action. This book includes a written script for vaibbahk. It also includes a posture for every symbol, so you can speak vaibbahk through dance. We have a method for speaking vaibbahk through musical composition, both in western and microtonal tunings. There are guidelines for spatially spelling vaibbahk words, using interior design, costume, altars, and so on. There are also guides to constructing smell and taste based modes of speech.

Vaibbahk is spoken through all media, including dance, music, and installation art. Every appearance of reality is ultimately an utterance of vaibbahk. Including the scene and sounds of you reading right now.

This book presents only one dialect of vaibbahk: that which uses Sub/Urban Butoh Fu. Vaibbahk has already consumed all oracle systems. All symbols exist as roots within vaibbahk, even if you choose not to use them.

A guide is included for using things like kabbalah, tarot, runes, and the I Ching, as roots within vaibbahk.

This book also includes a general approach to entity work in vaibbahk, an exploration of the connection between Flower Mist and Vaibbahk, and a poetic form unique to the grammar of vaibbahk.

Once you get the hang of vaibbahk, it is possible for your chosen symbol system to speak to you directly, since every word is effectively a tarot spread, and the grammar allows you to randomly generate both the kinds of words/spreads, and the concepts those words contain (SBF/tarot/runes/etc).

The Future of Butoh Technomancy

There’s a lot more to be done with vaibbahk, and further books are to come, but hopefully this summary gives a decent overview of where things are at as of 10/2022!