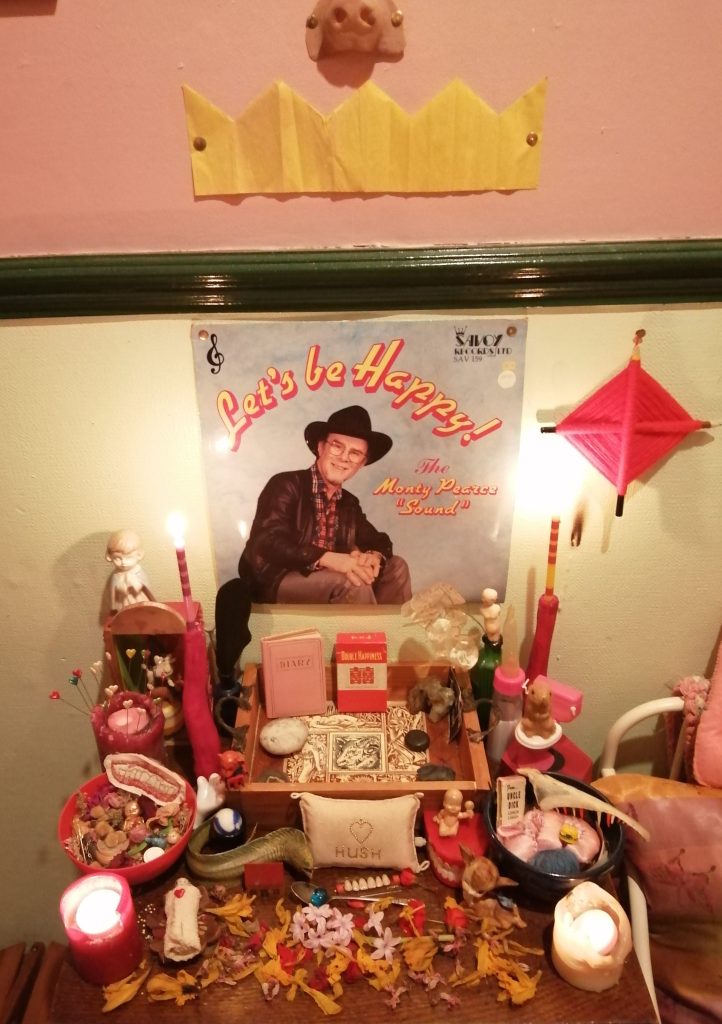 The altar which belongeth to @diamonddaber

This is what’s there and what it means.

Pig Snout: For use in ritual work.

God’s eye: When it’s turned backwards, I can look out of it.

Paper Crown: A reminder not to take myself too seriously. As if I ever could.

Porcelain Praying Girl: This represents moi, looking down over my altar, being sweet and cute and oh-so-pure.

Candlesticks and candles: I made the two tall pink candlesticks out of clay. They are pink and kind of biological looking.

The red candle with the heart pins stuck in it is for love work, duh. My brother found the pins on the floor one day, and so clearly, they were meant for me. The other candles are largely just there for candles’ sake. If I am doing a special working, it will have its own candle that I will carve and slather in oils and fuss upon, but there’s none pictured here.

And YES I burned the wall – be careful with fire, it sets things on fire.

Magic Baby Bottle: Did you have one of these as a child? It appears to be full of milk. When you hold it to your dolly’s lips, the milk seems to drain away, but when you right the bottle, it’s full again! I mean, what a great magical tool. I use this to feed my poppets.

Witch Finger: I put this on my finger if I need to point meaningfully at things. It’s like a wand, but funnier.

TRAY: My Dad made me this tray for Christmas one year. Set into it is an old tile we used to use as a coaster. It has four women representing the seasons, and in the middle there’s a VERY knowing-looking ram, and the word Aries. I’m not an Aries, but who doesn’t love a wink from a knowing ram?

My Rocks: I have a quartz-like stone shaped like the entrance to a cave. I found this when I was trying to revisit a favourite childhood haunt – a cave under a riverbank. The access to this spot had become a little bit more tricky, and I had become a lot less ten, and in trying to descend the almost vertical bank, I slipped. I managed to scrabble a stop, and when I did, this rock was under my hand. I made it down, washed the rock in the river, and took an easier route home. This rock represents a lot of things to me. It’s home, and the feral state of childhood, and reconnecting with that, and going back through entrances that we may have forgotten about.

Then there’s a strange blue striped rock that I found in the middle of the path on a walk with my mum. It is SO BLUE, I’ve never seen anything like it before. So this rock represents sudden and unexpected wonder.

There is a round grey stone I found on the beach. On one side there’s a white circle, on the other it has a faint outline of a crescent. So it represents the moon and that, yeah? Feminine tides, the suck in and the spew out.

There’s a big round white stone that I put things on top of.

Finally, I have a plain black round pebble. It represents self-control, an inner coolth, as well as my relentless collector-soul. There’s a poem I remember from childhood about three children who go to the beach. One finds a shell and puts it on the shelf, one finds a bit seaglass and does some other kind of wholesome shit with it, but Jack finds a little black pebble, and he keeps it for himself.

Little wooden house: Very boringly representing Home and all the positive things that go with it.

Wind-up teeth: Frankly, I find these things terrifying and intoxicating and they are on my altar so I can keep an eye on them.

Fake teeth: I buy these on the internet and use them as a kind of a trademark spice in spells I make. I also like to leave them in pub toilets, buses, the office etc – I like to create little what-the-fuck moments for people. Spread a bit of wonder.

Pin cushion: Can’t remember how I acquired this. I use it as a meditation aid – I make words and patterns on it with shiny brass pins. It says HUSH at the moment because I have a tendency toward turbulence.

Apostle spoon and the blue jewel: Hard to explain. I have a vague memory of some kind of blue jewel that I’m always moving towards.

Weird mouse: This is a hollow plastic shape with a mouse skin glued over it. I use it for glamour magic, when I want to put on another skin. As I appear to you, so I must be.

Double Happiness cigarette packet: This was another gift, from a partner who had visited America. Again, he knows me so well. And again, double happiness is my One True Will. I use this box as a kind of charging pot for any little doodah I’m working with, or for magical jewellery. If it goes in the box, it comes out doubled.

My Bowls: I found the red bowl on the floor. It contains a golden baby, one of six. The other five now live in various Special & Important Places, thus creating a nexus of Golden Baby Power around me. The sixth baby can see through all the other babies’ eyes. The baby sleeps on a pillow made from an embroidery I did of my own teeth. The embroidery used to live on the face of a big doll called Eido, but everything must eventually die and be reborn. Beneath the baby is a bed of flowers I have grown, shed hair from a white horse, keys I need to keep safe, a chilli I dried out whose energies need to be tempered, pussy willows for the innuendo (in your endo) and various bits and bats that I think would benefit from the baby’s proximity or vice-versa.

The blue bowl is something I bought myself for my 40th birthday. ‘A Blue Bowl’ is a perfect poetic notion to me. In the bowl there is a bird’s nest I found abandoned on the pavement one day. In the bird’s nest there are four polished pound coins, to encourage plenty. On top of the coins, there is a pink satin pony I made from a pattern in Jean Greenhowe’s Making Miniature Toys and Dolls, which has been a sacred text to me since I was seven years old. The pony has precious things sewn into its hooves, and its name is The-Wish-and-The-Result. The pike jaw protects it.

Red hexagonal box: Wrath Box – sometimes if I get really angry, I shout and spit in the box. Now I have a box of wrath, which can be useful.

Wooden box containing balancing dogs: These are Rex, Fritz and Fife, The Three Jumping Pups of Jesus the Christ. There are some objects that are gateways to a different way of feeling and thinking. This is one of them.

Lego monkey: I have had this for as long as I can remember, and have somehow managed to keep hold of it. Lego monkey had an accident when I was about 13 – I melted its ear with a nail varnish remover pad. So it serves as a reminder not to let vanity interfere with joy.

Eel: Eels are my favourites. This one is made of plastic so he’s not too slimy. He sits on my altar to remind me of the infinite weirdness of life.

Let’s be Happy! The Monty Pearce Sound: The centrepiece of my altar and my magical credo. This was a gift from an old co-worker. He found it in a charity shop one lunchtime and left it on my desk, because he knew me. There is great power in gifts given with love. Whenever I am particularly happy, I give Monty a little kiss. I highly recommend his music, especially the Hawaiian stuff. It’s great music to regain consciousness to.

Blue bottle and green bottle: One contains honesty, to protect me against lies, and a funny poppet I made that came out all wrong and so I keep it there from pity.

The other has a six-inch nail left over from a day I spent building a fence in a field, to represent hard work well done. It also has a crow feather – a crow got run over by the corner shop and I took one of its feathers to put on my altar to honour its death and give it some meaning.

POPPET: My main poppet is a Frozen Charlotte doll. I know poppets are usually handmade, but I have a big connection with this thing. If I really, really want something to happen, I go into a trance while rubbing her bum (for some reason this works best on buses) and it always, always works. She rests on the base of a big pine cone, and she’s swaddled in a bandage to keep her safe and steady.

Scattered flowers: I don’t really have a garden, just a tiny little yard, but I try to keep something growing all year round and whatever I grow, I harvest for my altar. I feel it’s important to strew my altar with things I have grown and nourished. And if I feel it, I do it. When it’s time to move on, I save the dried things in jam jars, for a purpose I cannot yet discern.

The drawer under the altar holds candles, sweeties for my baby, more teeth, more babies, plus other things of use to witches, for example:

The Lower Shelf and Beyond

Below that, there’s a shelf where I keep my Big Book, and underneath the whole thing is a pompom rug that my cats like to sleep on.

There are other things on the altar that I haven’t described here because their purpose is secret or ineffable. There are things I took off the altar before I took the photo because they were active workings and projects, or because their power is too great for mortal gaze. Or because I was worried my Mum might see this. But here you see about 80% of my usual working set-up.

For me, my altar is a place of power. It’s a battery and a gateway into my magical self. When it’s all lit up and scented with incense and oils, and when I am before it, it sings.

Other pieces by Diamond Daber